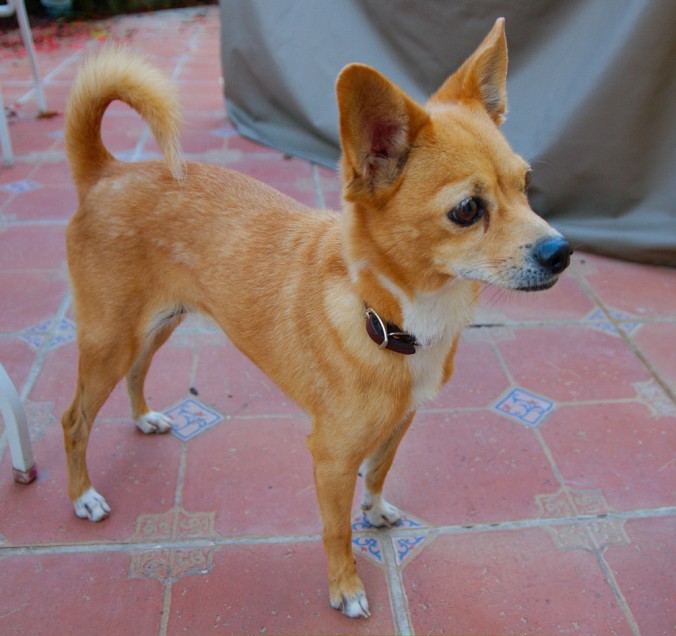 I'll always remember him this way.

He was a little chihuahua mutt that I rescued from a military installation. Some young soldiers were kicking and throwing things at him. I hollered at them and scooped up the little guy. My heart went out to him. On the car ride home, he stood up on his hind legs looking straight ahead through the windshield while he tried to bite me. I was already beginning to regret this.

He was a nervous, bad-tempered little dog. At first, I met his aggressiveness with force, but he just got more desperate and anxious. Soon, I realized I couldn’t  force good behavior on him. It sounds stupid for that to even be a revelation, but alpha dogs don’t coddle. In the pack, you either get your act together, or you get a beat down. But I realized I couldn’t strong arm him into obedience. I would have to meet him with gentleness no matter his mental state. When he got worked up in a frenzy it wasn’t good for anyone. So I tried to adopt a kinder softer stance with him. Loud voices, sudden movements, forcing him to do anything, would get him worked up and he would spin around and try to harm himself.

Also, we never did break him of the peeing on everything in his sight – inside or outside.

When we went to the park he would bark at us until we came back to get him and take him too. He hated the leash though. Another thing to torment me, he seemed to say, but I guess he preferred to be with us than to be left at home.

Once we came home to him huddled in a corner on our terrace all bloody and disheveled. “Oh my God,” I yelled, “Billy’s chewed his tail off.” He’d always hated it, it tormented him. He would catch it out of the corner of his eye and spin for the attack. Around and around and around he would go until we thought he’d have a heart attack. It wasn’t really funny, but we did not know how much it tormented him until he almost killed himself to be rid of it.

After one surgery and the cone of shame, we were nearly ready to pack it in. He was still bent on harming himself like an insane asylum patient. We had to be with him all the time, and his growling and frenzied attacks on his butt were putting us all on edge. I remarked at the time that this must be a small window into what the parents of addicts go through. No matter what we did, he wanted to hurt himself and there was nothing we could do but supervise him 24/7.

We closed our eyes for one second, and he had what was left of his tail again.

After another surgery and an infection, we were able save his life. He now had a nub. We bought him a spiky collar to go with the new tough-guy image. He seemed to enjoy not having his tail. He became a decidedly calmer dog. His hated nemesis was gone.

Soon after we moved to our new house, he developed a cough. It persisted for more than a week, so Laura took him to the vet. An x-ray revealed a large tumor nestled next to his heart, pushing on his trachea. It was so large already and in a difficult place.  “He’s already 10, let’s just keep him comfortable. If we see he is suffering too much, we’ll put him to sleep.”

He carried on like that for a little over three years. There was a moment last year when he stopped eating. I thought it was time and we discussed it as a family. Everybody was distraught, especially the little ones. They didn’t want Billy to die. Billy, so as to not let us down, suddenly started eating again. He was back to his peppy self, and we soon forgot about his little episode of sorrow.

Recently, he had been eating less and less. He’d take a few bites of food, wander over to be petted. If we petted him sufficiently he would take a few more bites. The bites became fewer and fewer, the pets more frequent. We’d have to stroke him many minutes before he would go into his kennel at night.

Today though, he didn’t want to eat. He just stayed in his kennel all day. I roused him to go out and pee this evening. He needed to go out for a little bit. He was so pitiful, but he trotted out after some cajoling.

After twenty minutes or so, I called them in. Jessie wouldn’t come, and I didn’t see Billy at all. I went out to look for him in his usual places, and I found him collapsed near his favorite flowerpots.

I wouldn’t say he was the best dog. He was soft and cute, but he was nippy, generally nervous and bad tempered. We had made a choice, though, to take care of him, to accept into our family. He taught us that love isn’t an affection, that we don’t love because of what you do or because you are smart or cute or fun. We loved you Billy, because we could, because you needed us to.