A Morning at the Botanical Gardens in Rio Piedras

Olaia’s project for French class. Tickles me to death. Her Tio Roberto helped her film it.  There’s even a little song at the end.

Epic Happenings in the Primate House

We have some milestones over here in the O’Malley Gorbea monkeysphere.  All the little monkeys are beginning to pull more of their own weight, contributing a fair share to our little settlement here in Puerto Rico.

So here they are, documented by me, your resident big monkey participant observer.  All dates are in ISO 8601 format unless otherwise noted.  *chuckle*

Jaimito learned to ride his bike yesterday, 2008-04-04, at approximately 5:30 pm on a sunny afternoon.  There was a break in the week of rain, the clouds parted, and a clear beautiful cool breezy day ensued.  Jaimito took full advantage pedaling all the way from the little hill to the little tree.  I’ll get some video of it today and post it.

Javier is potty trained.  He’s such a big boy now.  Yeay!  He decided he no longer wanted to wear a diaper – ever – starting in earnest on 2008-04-01.  Yes, that’s right, April Fool’s Day, but this was no joke.  Javier was dead serious.  He’d flirted with potty training for the better part of a month, but it was the Spider-man underwear that finally got him to go all in, declaring, “I’m Spider-man.  I’m the black Spider-man!”

He’s also taken a large step in his language skills.  He feels more confident expressing himself and we’re beginning to see more of his sweet personality.  His favorite thing recently is throwing his arms around us and declaring, “I love you, Daddy/Mommy/Olaia/Jaimito/Asier.” 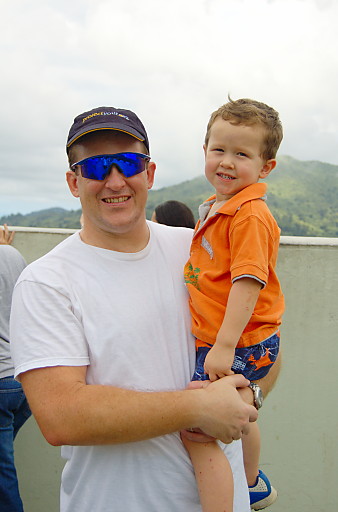 I’m potty trained too, but then I guess you could have guessed that.  Laura loves this picture. *wink*

Asier can walk. Here’s a video.  He just up and decided it one day, 2008-03-13 at precisely 15:17 (that’s because the video has a datestamp, hehe).  His brothers and sister were prodding him, standing him up and encouraging him.  Soon he was away with his chubby rolly poley butt.  See for yourself.

Javier Washin’ the Car (or playing with bubbles)

Despite a tight schedule and budget, our main protagonist, Javier, seems more interested in bubbles than the production of this picture

If you need me I’ll be in my trailer

Look at that little man, he’s gonna ride that poor horse into the ground.