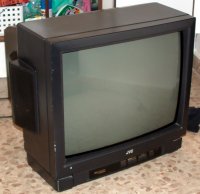 I know it’s a TV, but what a TV it was. That TV was over 15 years old. I bought it my sophomore year of college and proceeded to haul it with me literally all over the world for the next fifteen years. That JVC television went through a lot, but alas, all of this earth ­is mortal and it was handed off to the city disposal last week. It actually hurts a little bit. I’m a dork, I know, but bear with me as I recount our tale of adventure and perseverance.­

The TV started its life off in St. Louis Missouri, at Washington University where it endured three years in a Fraternity house, beer, room fire, smoke, and things unmentionable. It hung in there because it was young and full of life.

After college it traveled cross country in a U-haul to Boston, Massachusetts. It hung out with me for six months while I worked at a new job. We were single and loving it. I was then transferred to San Francisco in December of 1993 and my faithful TV tagged along as it was lofted up to the dizzying heights of Noe Valley, even putting up with my crazy rollerblade antics around town. We were still young and stupid, but we had fun.

Then Laura and I got married and moved to Oakland. She didn’t just get a husband, she got a TV, and what a TV it was. As she will tell you, she has some kind of jinxing field that follows her wherever she goes. Any home electronics equipment found within ten feet of her sphere of influence has a drastically shortened lifespan. I don’t know how, but the TV seemed to take to her, and like her tough husband, seemed none the worse for wear. Experience had made us tough, and we lapped it up.

After a few years, the time to move had come again. This time, we were to head to the Basque country of Spain to complete Laura’s doctoral research in Anthropology. Our NTSC buddy tagged along, never mind he did not speak PAL. It’s all PAL to me, he said, besides they don’t even have my kind of 110/120 V 60 Hz food. But like a trooper, with a weird pinched screen, strained to play VHS tapes of shows sent to us from various family members. Like seasoned competitors we pushed through and survived.

So after a couple of years, we moved to Puerto Rico to start a new life. Laura was pregnant with Olaia, and we moved into a little seaside apartment in the Condado. Our trusty TV was there with us, happy to be back on native soil, but cursing the sea air.

We were comfortable and safe, until that fall when Georges decided to pay a visit, a category 3-4 hurricane that knocked out electricity, water, cable for the better part of three weeks. Mr. TV was wobbly, but like us, pulled through, and we began to think we would live forever. You hit us with everything, and I’m still here.

Fast forward to our new house in 1999, and on into 2000. Olaia, ever our little helper, decided to dump Windex onto the screen of Mr. TV and with her trusty paper towel "clean" it. Mr. TV had had enough, and it was the first time we had indications he might leave us.

Two days, of patient waiting, hair dryer blowing, and sighing (or cursing), and Mr. TV came reluctantly back to life. Why do you molest an old man, he asked. Let me die in peace.

Sometime between 2000 and 2004, after staggering on creaking joints, he stopped responding to our calls for entertainment from time to time. Crotchety he had become, a withered old man who didn’t give a damn anymore. Make me care, he said to us. I could still smile and admire his spirit, but it was getting more annoying by the month. Make me miss one single Buffy episode and I will heave you into the trash.

Next came the trial by fire. Desperate to light a barbecue and without lighter fluid, I pulled out the only flammable liquid I could on short notice, 180 proof rum. Hmmm, rum flavored charcoal for barbecuing steak. In a Tim Allen moment while dumping alcohol onto the open fire, flames entered the neck of the bottle, ignited the vapor and shot fireballs across the patio, through the open door up the side of the TV, and up the side of the house. Airplane pilots mistook it for an SOS call. I quickly smothered what I could but let the rest burn itself out. "Guess what I just did?" I said to Laura laughing nervously. You married folks know the sigh, right?

So fire, flood – we just need plague and pestilence and this would be a complete Biblical tale.

Tropical Storm Jean paid a visit in late 2004, and Mr. TV finally gave up the ghost. I’m done, I’ve had a full life, let one who is young and strong and brave take on this family now. I have given you all my best, and he ceased to function for ever more.

There he lay in state for several months as I contemplated a fitting end. Should he be dumped into a landfill or be properly recycled with his heavy metals? Does Puerto Rico care that TV’s are being dumped into landfills? Well, I’ll keep you around for a little while longer until I figure out how to dispose of you.

And the day finally came. Friday, April 1st 2005, you finally made your way to your final resting place. I know not where, only the City of San Juan knows for sure, but good-bye faithful servant. They don’t make ’em like you anymore.